South Africa and Canada face off in the Rugby World Cup Pool phase playoffs. Both teams are in Pool B along with our very own New Zealand All Blacks, Italy and Namibia. What are your predictions for the upcoming match between the South African Springboks and the Canadian Canucks? We have a few thoughts on how the game will play out so far. But first we will look at how both teams have played so far and their records on the World Cup stage. We will also take a look at popular predictions, odds and picks for this match. If you are already sure of your own predictions of how this match will go, you can place your bets online at any of the top NZ betting sites. Sign up online place your bet sand stands a chance to win big for your Rugby World Cup SA v CA match. 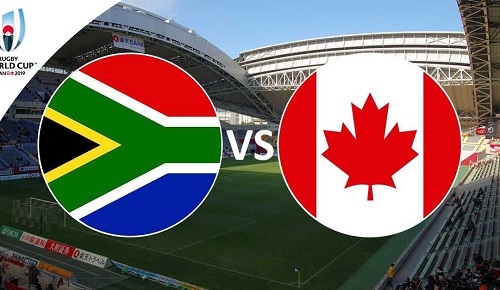 Of the 500 test matches played by the Springbok Rugby Team, 311 have been wins. That is over 62% of their games they win. That is an impressive record considering that they often played at a world stage against the cream of the crop.

So far South Africa rugby results have been as expected, impressive. They have only lost one game in their current pool of the three that they have played. The Springbok World Cup Squad 2019 looks like a solid bet against Les Rouges.

So far, the Canada Rugby World Cup Team has not been doing so great. Of the two games they have played so far, they have lost both. Now they have to face former RWC champions the Springboks who have so far shown great form. Although Les Rouges have attended each RWC since 1987 they have only made it to the quarter finals once.

Of the test matches played by the Canadian Rugby Union team so far, they have lost over 60% of the games.

Not many bookies have lines set for an outright win since the springboks are a clear favourite.

There are quite a few handicap odds out. We have listed the best possible odds below