The Ryder Cup so named after the English entrepreneur who first donated the trophy back in 1927 is part of the PGA TOUR. Held every second year between the US and Europe, the golf event is loyally followed by millions of golf fans world wide and here at home. The Ryder Cup pits the best of European male golfers against their US Counterparts. It goes without saying that it leads to some spirited competitiveness and even more exciting betting action. 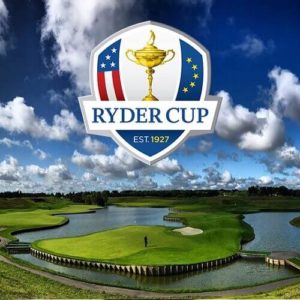 It’s been almost a century since the Ryder Cup was established yet it keeps getting bigger and bigger in terms of viewership and betting fans. Hence, we have compiled a list of the best New Zealand sportsbooks with a variety of golf tournament odds including Ryder Cup odds. Along with the top-notch golf bookies is a guide on how to bet on the teams, a look at the Ryder Cup format and how it affects betting amongst other things.

Bet on the Next Ryder Cup at NZ Sportsbooks

Although the Ryder Cup is not one of the four Golf majors it is a major event on a golf fan’s calendar and even more so on a punter’s calendar. Maybe because the event is only held every two years so the anticipation is intensified by the extended wait. Betting on the Ryder Cup results is a bit different from betting on other golf events. In the Ryder Cup format, it’s teams rather than individuals playing against each other.  Think of it as a field bet type of event.

To bet successfully on the Ryder Cup punters must understand the event format and how Ryder cup Teams play throughout the tournament. Each of the teams from the US and Europe have 12 players each and selected players from each of the teams compete in the 28 matches over the course of the tournament. The matches are played over three days from Friday to a Sunday. There is a total of 28 matches of 18 holes or more played.

The first two days of the Ryder Cup Friday consists of four fourball matches played by eight players selected by the captain from each of the teams. The matches are split between a morning session and afternoon session. There are two types of four player matches on the Friday and Saturday. The first foursomes match is a match consisting of a pair of golfers from each team against another pair from the opposing team. The pair from each team alternate and tee off at odd and even numbered holes respectively. The fourball match has each player from the pair teeing off their own ball throughout. On the Sunday, there are 12 singles matches and all individual team members play.

In the four-ball match the player with the Ryder cup score for the pair / team is the higher score between the two players. Each individual win scores a point for the players team, while a tie after 18 holes scores half a point. There is no tie-breaker system in the Ryder Cup tournament. In the event of a tie that is both teams have 14 points, the trophy goes to the team that held it in the previous cup.

Future betting- this is a popular bet on the Ryder Cup especially because of the wait between each tournament.

Prop betting – because of the unique Ryder Cup format and score system this betting market is one of the most popular betting markets in the tournament. The range of possible prop bets is limitless and allows newer inexperienced bettors a chance to land some big money pay-outs.

Although those are the most popular bets placed on the Ryder Cup, there are more golf bets Kiwis can wager on the historic golf tournaments. Below are some of the common golf bets players can place on the tournament

To make or miss cut

Ryder Cup Results Over the Years

Originally the Ryder Cup was just made of US players playing against teams from Britain and Ireland. The last match with only those countries was held in 1977 and from 1979 Europe was included and players participate as Team Europe.

Since the inclusion of Europe in  1979, Team Europe has dominated the Ryder Cup. Europe has garnered eleven outright wins plus one retained cup as a result of a tie. America follows with eight wins over this period. It’s actually commendable that the US has managed to clinch the Cup as many times as it has because it competes against a bigger pool of players in Team Europe. Europe not only has players from Ireland and Great Britain, it has some of the best players from Belgium, France, Denmark, Germany and Italy amongst others.

The Ryder Cup may just be the most competitive of all big golf events. This is because it is the only large golf tournament with the exception the Presidents Cup where there is no prize money. Despite the high-profile coverage, the Ryder Cup receives and the viewership, the golfers simply play for the love of the sport and for bragging rights. You can only imagine how competitive the event must be.